Everyone on internet has been talking about Meta and Metaverse since its idea was proposed by Zuckerberg. I think the general opinion of people on internet can be summerised this way: "The idea of metaverse looks like something from black mirror. Everyone knows its bad hence its just another bad decision made by Facebook."

I do agree with the first part that the idea of Meta does look like something from black mirror and is depressing. however, as far as second part is concerned, i think, Facebook actually made a right decision. At this point metaverse IS inevitable And most of the people who are criticizing Facebook WILL be in metaverse.

Why Metaverse is Inevitable

I remember reading an essay where the author claimed that when a species becomes more advanced it tends to focus its attention on finding shortcuts. What kind of shortcuts? We humans have reached a stage where we focus much of our attention on achieving things virtually rather than in real life. Why virtually? Because its easier. I quote : "Technology is fairly good at controlling external external reality to promote real biological fitness, but its even better at delivering fake fitness - subjective cues of survival and reproduction without real-world effects" further he says "...I think that aliens forget to send radio signals or colonise space because they're too busy with runaway consumerism and virtual reality narcissism. Once they turn inwards to chase their shiny pennies of pleasure, they loose the cosmic plot"

This is the reason why i think metaverse is inevitable. Metaverse is the next step of the 'shortcuts' we create to make our lives easier. Want to go to Switzerland but you are an average wage earner from a third world country? No problem! just buy this affordable meta VR set, download/stream this Switzerland program and within minutes you are in Switzerland. (virtually) Isn't it a good shortcut? Traditionally, you would have to earn a lot of money to travel in Switzerland but now (lets say 2027) you can get it cheaply without leaving your parent's basement!

Now for us internet is not new. We know enough history of internet that we can see patterns to predict future. I agree with Zuck when he said "Our (consumer's) internet consumption has moved from 'text' in its early stages to pictures to now videos (Tiktok, Insta-stories...) and future's consumer demands a metaverse" Metaverse is inevitable if Facebook doesn't do it someone else will. Internet is fast and it is getting faster day by day, companies like facebook are investing lots of money into making equipment for metaverse, people want to engage more with VR. In other words consumers are willing to buy metaverse, companies are willing to sell metaverse and infrastructure is willing to support metaverse. Hence it is inevitable.

What would have happened if Zuckerberg in 2004 had made a similar announcement for Facebook what he made for meta?

Zuckerberg: "umm..Yeah so..we got internet but we're still kinda unconnected so I'm gonna launch Facebook a social media website by which people would be able to connect with each other, share their birthday pictures with friends, can send messages, if you are a seller you can sell products. Basically the possibilities are limitless"

People: "OMG! its so frightening! we would be able to send each other messages but you know what this dude will own the platform so his company would be able to read those messages. And no I'm never gonna share my private birthday memories with people on internet. What do you mean by sellers can sell their products on internet? they would be able to target advertising and sell me the things that i don't want to buy! No this idea is clearly stupid no one is ever gonna use your authoritative platform. No one will!"

But what actually happened? in 2021 there are approx 2.8 billion Facebook users. If Facebook is bad than no one should use it right?

Its a well known fact that Facebook (company) is a privacy nightmare but still its users are constantly increasing. Generally it seems like convenience overpowers common sense. Few idiots who get pissed off by the privacy policies of these social media platforms make their own websites to share their based articles. (Bascially these pople focus their attention on finding alternatives) VERY few saints leave internet altogether. However, free market is like democracy which is ruled by majority not by minority. Majority on internet needs convenience, hence ignorant convenience rules the internet. Metaverse seems to be a really convenient thing. Despite the consequences of metaverse i think, people will still vote (use) for its rule. Sure a minority of outlaws will always exist with their self hosted alternatives but they will never be able to become a member of Internet's parliament.

Don't be a Luke Smith

Luke Smith is the reason why i have my personal website. And I'm not alone, there are many people who are influenced by Luke. But one critique of Luke is that he seems to be in an irrelevant war against social media. He is focusing too much on finding alternatives. Do you really need a self hosted twitter alternative? Twitter is a disease. When you are suffering from a disease, you don't find it's alternatives you get rid of it altogether.

What i'm trying to say is when metaverse will become a normal thing maybe lets say in 2028, it would be better to not to host your own metaverse or find alternatives but to rather leave metaverse altogether. 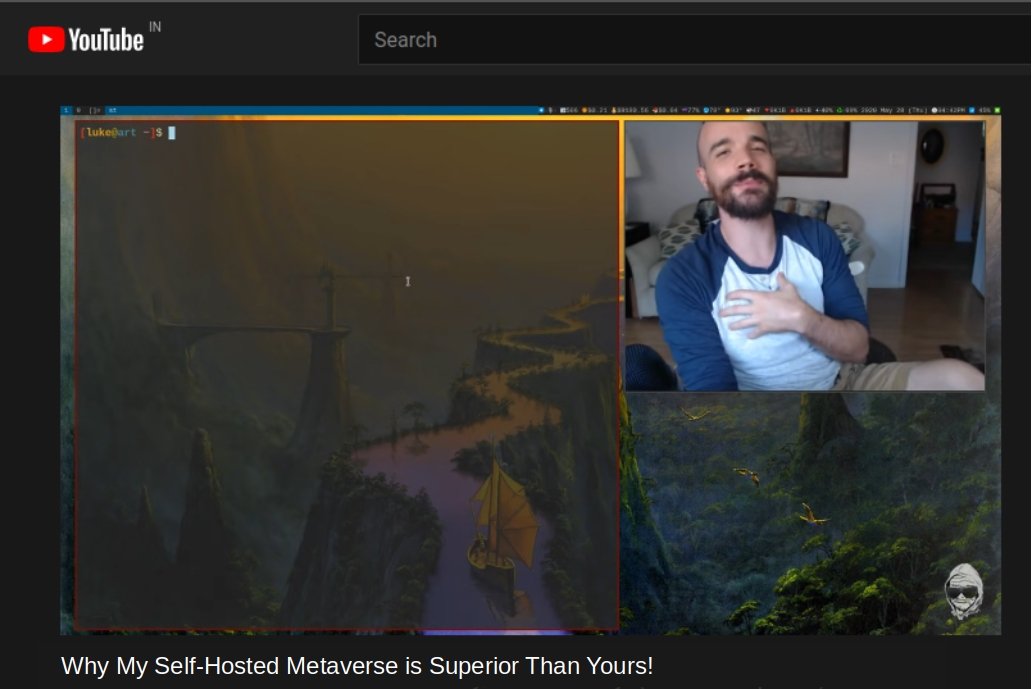 I think Zuck made a right decision by focusing his companies focus on metverse. The reason he was able to make such an prediction for future is that now we know a thing or two about the history of internet and connecting dots leads nowhere but to metaverse. It seems metaverse industry is inevitable. And Zuck's willingness to be an early bird in this industry might beneficial for Facebook (Meta) that's why i think future Zucks bro!